Lustenau startup company on the road to success

All medication under control

During a visit by the likeable young entrepreneurs Claudio Errico and Simon Brei, Mayor Kurt Fischer convinced himself of the conclusive and brilliant business idea for storing and taking medication. Anyone who has to take tablets regularly or who is preparing to take them for relatives knows where the problem often lies: It is difficult to keep track of all tablets. Dosing dispensers are already on the market. But what the two invented to do so has it all: a modular system for storing tablets and dispensers and other important functions in one. Claudio Errico and Simon Brei are paramedics for the Red Cross and have often experienced first-hand that important time was lost during operations because patients and / or caregivers did not have an overview of the necessary medication and other important health information in one fell swoop. And this is where “Pillbase” comes into play: At a glance, you or the attending doctor or nurse can see which medication is to be taken, how often and when. The side parts of the medication packs are used to label the individual drawers, there are clips on the side for the e-card and doctor’s notes or documentation – in short: there is the best order and overview. Two young entrepreneurs from Vorarlberg in the Millennium Park are on the verge of success: With a modular storage system for tablets and medicines, “PillBase” has already won first prize as the best business plan in Vorarlberg. Claudio Errico and Simon Brei have now qualified to participate in the successful TV format “2 minutes 2 million”. The show will air on PULS 4 on April 2, 2019 at 8:15 p.m. Dosing dispenser and storage for tablets, e-card and documentation in one The two resourceful young men – Claudio was a full-time banker, Simon Brei works for a large Dornbirn company for lighting solutions – have developed and perfected their business idea over the past two years. Now the prototype, also made in Vorarlberg, is ready to be presented to an audience of millions: The two of them have the chance to convince the jurors of their product on the TV program “2 minutes 2 million” on April 2 and as investors to win. The show will air on PULS 4 on April 2, 2019 at 8:15 p.m. 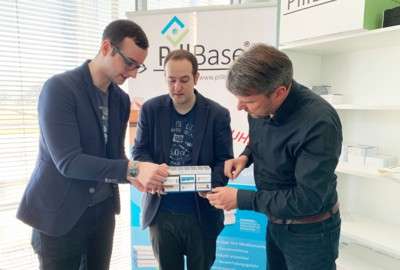 The mayor convinced himself of the product.

To the Post
Cookie-Zustimmung verwalten
We use cookies to optimize our website and our service.
Manage options Manage services Manage vendors Read more about these purposes
show settings
{title} {title} {title}
Scroll To Top